HVJ-E as a novel anti-cancer reagent 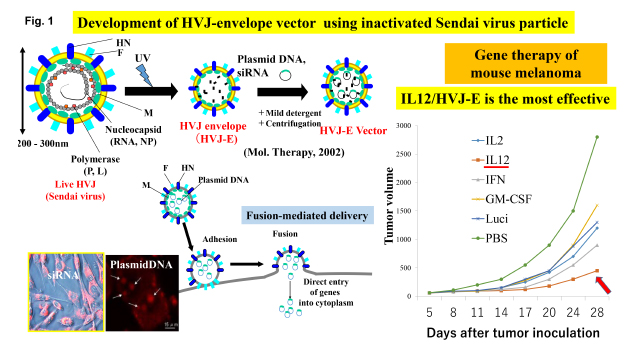 As a tool for cancer research, we have used Sendai virus (hemagglutinating virus of Japan; HVJ) which was isolated in Japan in the early 1950’s and is famous for inducing membrane fusion. It is a mouse parainfluenza virus belonging to the paramixoviridae genus containing negative strand RNA (appr. 15kb). Two glycoproteins, fusion (F) and hemagglutinin-neuraminidase (HN) protein, are present on the viral envelope. We developed a novel drug delivery system based on inactivated HVJ particle (HVJ envelope vector; HVJ-E). The vector can directly introduce plasmid DNA, siRNA, proteins and anti-cancer compounds to various cells both in vitro and in vivo (Fig. 1). 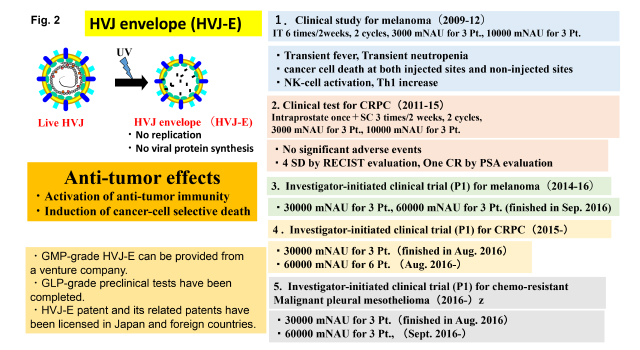 While examining the effect of HVJ envelope vector on cancer treatment, we discovered anti-tumor activities in HVJ-E itself without incorporating therapeutic materials which has lost the ability for viral genome replication and viral protein synthesis. Those activities are the activation of anti-tumor immunity and the induction of cancer cell-selective death. As shown in Fig. 2, clinical grade HVJ-E is able to be prepared using human cells by a venture company, GenomIdea. Pre-clinical safety and toxicity tests were already finished.

3. Current status of clinical applications of HVJ-E for cancer treatment

4. Mechanism of anti-tumor activities of HVJ-E 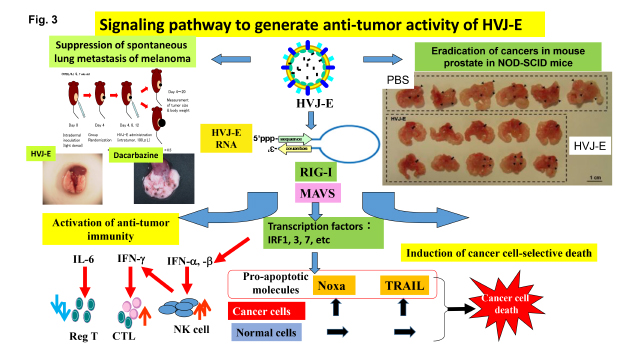 As shown in Fig. 3, we have been analyzing the mechanism for those activities as follows;

1) CTL and NK cell against cancers are generated by the activation of type I interferon and several chemokines (Cancer Res, 2007, etc). Those factors are activated by the introduction of viral RNA fragment into immune cells, especially dendritic cells, independently of Toll-like receptor pathway. RIG-I, a cytoplasmic RNA receptor, activates the production of those factors by recognizing viral RNA fragments. We identified the structure of HVJ-E-derived to stimulate RIG-I signaling pathway (Mol. Therapy 2016).
In spontaneous lung metastasis model of mouse melanoma, direct injection of HVJ-E into skin tumors completely suppressed lung metastasis, while dacarbazine, an anti-melanoma reagent, failed in the suppression of lung metastasis.

3) Regulatory T cells are suppressed by HVJ-E injection in cancer tissues and regional lymphnodes. It results from the suppression of FoxP3 by HVJ-E-induced IL-6 secretion from dendritic cells. We identified that F protein of HVJ is necessary for IL-6 production in dendritic cells (FEBS Lett. 2008). The mechanism is independent on either Toll-like receptor or cytoplasmic RNA receptor. A novel receptor for F protein may be present on dendritic cells.

4) Cancer-cell selective apoptosis has been investigated (Clin. Cancer Res. 2012). We conclude that the apoptosis is achieved by the introduction of viral RNA fragment. The signaling pathway is mediated by RIG-I/MAVS. Different expression of apoptotic genes results from the difference of epigenetic control of those gene loci in cancer cells and non-cancerous cells.
In orthotopic prostate cancer mouse model, single injection of HVJ-E into prostate after tumor formation eradicated prostate cancers in NOD-SCID mice. 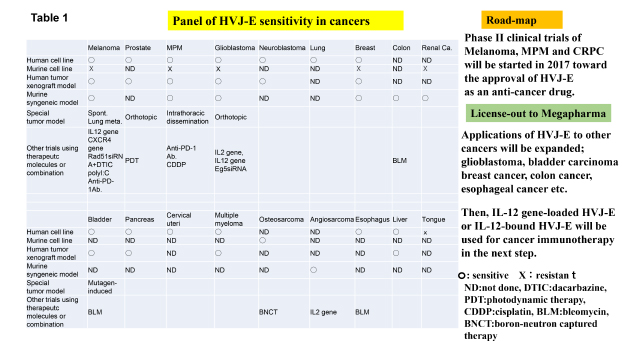 Table 1 shows the sensitivity of various cancers to HVJ-E. Most of cancers become the targets for HVJ-E. We are going to forward Phase II clinical trials in melanoma, CRPC and MPM. Along with these activities, we will start clinical application of HVJ-E to other human cancers such as glioblastoma, bladder carcinoma, breast cancer and esophageal cancer. On the other hand, we have already shown that HVJ-E containing IL-12 gene is more effective for melanoma treatment in mice. Also, we have already developed IL-12-bound HVJ-E without hemagglutinating activity for systemic administration (Clin. Cancer Res. 2013), which will be available for the treatment of multiple metastatic cancers.

We would like to promote international collaboration and clinical trials using HVJ-E in future. Please contact us at following address. 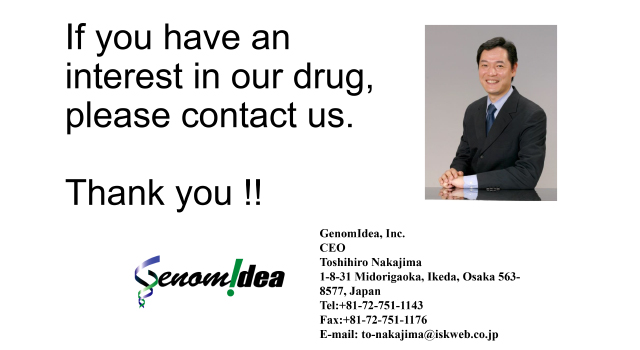 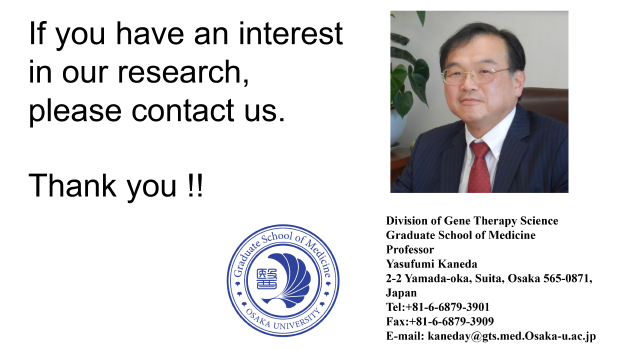 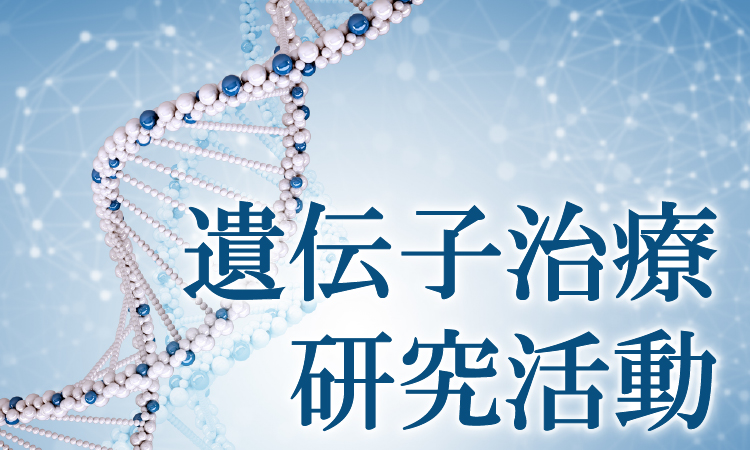 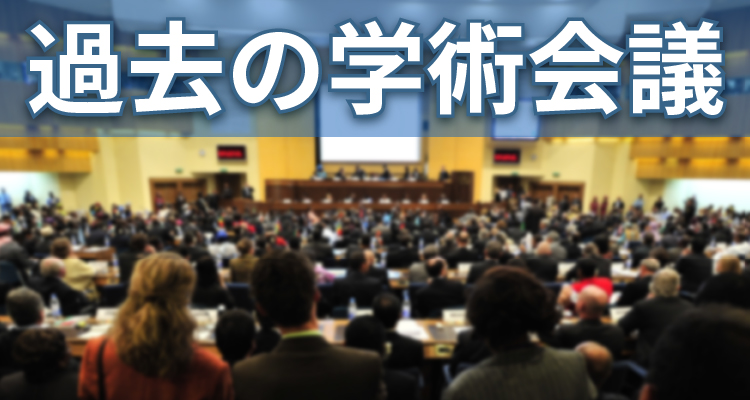